Here is a story from our curator, Janie Welker: 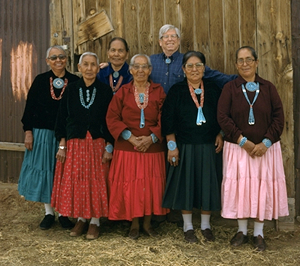 I had a fascinating conversation with one of our visitors on Friday evening. Evelyn Keen, who lives in Midway, is intimately related to three of the Navajo weavers in our exhibition: Alberta Thomas is her mother, Anna Mae Tanner is her aunt, and Despah Nez is her grandmother.
All three of the weavers made textiles based on sandpainting designs, which are used in sacred healing ceremonies by the Navajo. They were part of the Red Rock Weavers, named for the trading post in northeastern Arizona in the Four Corners area. Ms. Keen was thrilled to see her family’s artistry on view here.
Her story is particularly poignant as it encapsulates many of the hardships endured by the Diné (Navajo) in the twentieth century. Although she was born on the Navajo reservation, where parts of her family still live, she was separated from her parents at the age of six when she was forced to attend a government boarding school. Her father worked in uranium mines and contracted cancer, which eventually killed him. Interestingly, Edwin Kennedy, the man who collected the weavings and jewelry shown in our exhibition, was an employee of Kerr McGee, the first company in the country to mine uranium—it was this work that brought him to the Southwest, where he fell in love Native American art forms. He purchased almost seven hundred textiles, many of them commissioned through trading posts.
Ms. Keen remembers her mother rising at 5 a.m. and working until dark on the very finely woven textiles that she produced. The owner of the Red Rock Trading Post, Troy Kennedy (no relation to the collector Edwin Kennedy), would tell Ms. Keen’s mother, aunt and grandmother what designs he was interested in, and they would weave them. She remembers her mother glancing at a drawing of the sandpainting as she worked. But, despite the complexity of the designs, they were woven without any pattern: her mother, grandmother, and aunt could visualize exactly how the imagery would evolve as they wove. Textiles such as the ones on view in the museum would take months of work.
None of these textiles stayed in the family. “This was food on the table,” she said. Her mother was so happy when she completed a weaving and got paid—she could buy food and settle their debt at the trading post, which operated something like a company store in a coal camp—Troy Kennedy would extend credit until Mrs. Thomas finished a weaving. The weavers were paid far less per piece than Mr. Kennedy sold them for. They were not paid very much, Ms. Keen remembers.
In Navajo families, weaving is female tradition. Ms. Keen’s grandmother (Despah Nez) taught her aunt (Anna Mae Tanner) who, in turn, taught her mother (Alberta Thomas). The Edwin Kennedy collection of sandpainting weavings is among the largest known. It includes twenty-seven weavings by Alberta Thomas, twenty-four by Anna Mae Tanner, and twenty-one by Despah Nez. The Kennedy Museum at Ohio University invited Ms. Keen’s family to come and see their work some years ago, but only her grandmother, Mrs. Nez, was still living. They brought all of her weavings out to her so she could revisit them.