To complement our current exhibition, Landscape/Mindscape: Selections from the Wells Fargo Collection, the Museum has installed several landscapes from our permanent collection. 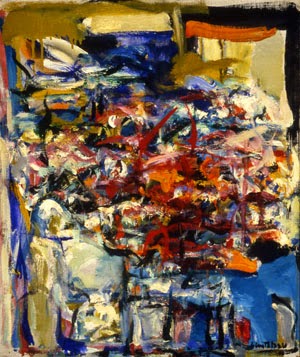 Among them is this eloquent abstract by Joan Mitchell who was one of the few female artists to succeed in the male-dominated field of the New York School. In 1951, she was included in the famed Ninth Street Show—an exhibition featuring the rising stars of the Abstract Expressionist movement. She continued to explore gestural abstraction for more than sixty years.

Mitchell established close and lasting friendships in New York with writers and poets, who greatly influenced her work, along with leading painters of the era. She continued to show work in New York for much of her life, but in 1955 began painting primarily in France. She moved there fulltime in 1968 when she purchased a home near Vétheuil, a little town north of Paris. The property had once belonged to the Impressionist Claude Monet. 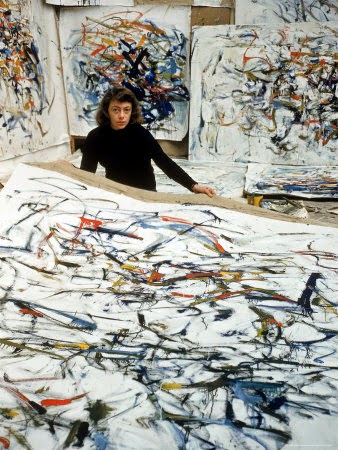 Unlike most Abstract Expressionists, Mitchell resisted the notion that painting is a matter of instinct.  Instead, she viewed painting as a willed act, not the result of chance effect.  Her works of the 1950s are tense and feverish, characterized by a busy network of disconnected, vividly colored strokes that are densest in the center of the image and juxtaposed against a vague sea of flat patches.  She is said to have been inspired by an “inner landscape,” the distilled sensations from a remembered scene.

Image credits:  (Top left) JOAN MITCHELL, Untitled, circa 1956, oil on canvas.Purchase: The National Endowment for the Arts, Patrons of the John Jacob Niles Benefit Concert, and Friends of the Art Museum
(bottom right) Joan Mitchell in 1956. Photograph by Rudolf Burkhardt.