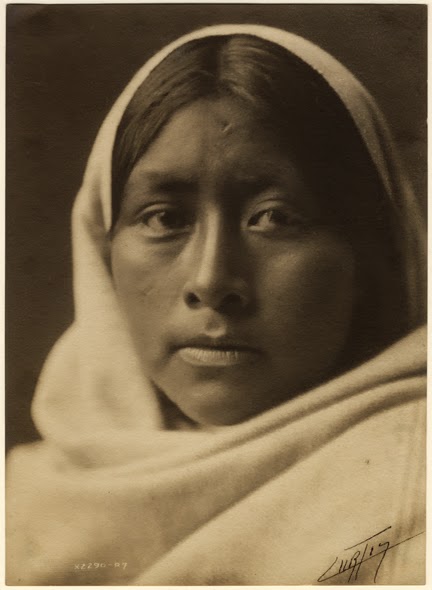 The Museum begins each new year with a new exhibition. This week we are taking down the fiber exhibition, Innovators and Legends and will begin the installation of the photography exhibition, Wide Angle: American Photographs from the Collection which opens on January 26.

The works for this exhibition were selected by our curator, Janie Welker, from the Museum's extensive collection of more than 1300 images. Wide Angle is an exploration of the history of American photography with works by Ansel Adams Elliott Erwitt, Robert Frank, Russell Lee, Ralph Eugene Meatyard, Cindy Sherman, Aaron Siskind, Edward Steichen, Paul Strand, Doris Ulmann, and Andy Warhol. One of my favorite images in the exhibition is this photograph of a Papago girl taken in 1907 by Edward Sheriff Curtis.

As a teenager, Curtis apprenticed as a photographer and by the age of 19 had opened his own photography studio in Seattle. There he met Chief Seatlh of Seattle and photographed his daughter, Princess Angeline. Her photograph is reputed to be the first portrait photograph of a Native American. In 1898 Angeline's portrait was selected for an exhibition by the National Photographic Society and helped launch Curtis's career. He was given $7500 by J.P. Morgan to produce a series of Native American photographs. Curtis not only produced over 40,000 photographs of 80 different tribes, he documented tribal cultures and history earning a reputation as both a photographer and an ethnologist.
Posted by Unknown at 12:30 PM